When it comes to boiling up a pot of coffee or stirring up a pot of stew, Old Laramie’s about as good a man as you’re going to find. But other than cooking three squares a day for the cowpunchers over at the Lazy G ranch, Laramie’s not good for much. He’s about as heroic as Walter Brennan on a bender.
But Laramie’s luck—and life—are about to take an amazing turn. Quite by accident, he somehow manages to save a family of Mexicans from bandits, and as a token of their gratitude they give him The Magic Quirt—a horsewhip that he’s told will turn him into a new man.
The transformation is indeed magical. Suddenly Laramie is performing feats of ingenuity and courage that would make even the Lone Ranger proud. But magic is a funny thing—and as Laramie’s about to discover, sometimes it’s all an illusion.
Also includes the Western adventures, Vengeance Is Mine!, the story of a young man who sets out to avenge his father’s death only to commit an act beyond redemption, and Stacked Bullets, in which a game of chance is fixed, a whole town is cheated, and nothing but a stack of bullets can make things right. 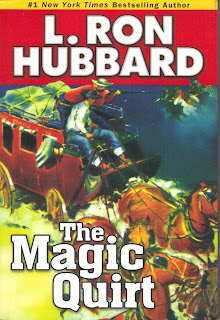 This book actually contains three western stories from the pulp magazines: The lead story, THE MAGIC QUIRT, which was originally published in the July 1948 issue of THE RIO KID WESTERN. Plus, VENGEANCE IS MINE and STACKED BULLETS.
THE MAGIC QUIRT has the Lazy G trail cook rushing to catch up with the punchers when he loses control of the wagon and almost runs down some cowboys harassing an old Indian and his wife. The cowboys were a nasty bunch, but took off before they could finish their dealings with the Indians.  The old Indian wants to thank Old Laramie for his help, but the cook doesn’t want any payment. Still, the Indian gives him an Aztec statute with snakes on it, saying it will make him a big man. Now Old Laramie has been reading books on magic and things, and now believes the statue is magic and will, indeed, make him a big man. He quits his job, goes into town and gambles, winning big stakes, then has a shoot out with those cowboys he’s ran away earlier. He thinks it’s all because he’s a big man now, and it’s the magic of the statue, only to discover the statue is one of hundreds the old Indian makes and sells to the white man. They have no magic, and Old Laramie passes out. A really enjoyable read.
VENGEANCE IS MINE is more prophetic. Young Whitey Bates takes some time off at the ranch to check on his father who has been mining for gold in the hills all his life. When he reaches the little cabin he finds his father dying from a gunshot wound and he’s talking out of his head. Finally, Whitey thinks he calmed his dad down enough to be coherent, and asks who shot him? The old man keeps voicing a name, and Whitey believes it’s the name of his killer. He rides out after his dad dies, and trails after the man. Half dead himself now, he’s led to a small town where the man is supposed to be. Stumbling into a bar he sees four men and asks if either of them is the name of the killer. An old man steps out and admits it’s his name, and Whitey shoots him. Whitey has been poisoned by cactus needles from a Century Plant and is dying, and begs the men to fund the doctor for him. Now he discovers the man he has killed was the doctor. Whitey’s father had still been out of his head when he named his killer, and remembered a name from his past. In fact, the shooting had been an accident when Whitey’s father stumbled into brush and he shot himself.
STACKED BULLETS: In the little town of Stud Hoss, Charley Montgomery is sitting at poker table with ninety thousand dollars from the sell of his spread to the Ringo Brothers. Two of Charley’s pals clean him out, then makes him a proposition; they’ll give him one thousand dollars back if he will shoot the Ringo Brothers. But Charley has made a deal and the Ringo Brothers promised to treat the town right with the water on the property. Well, evidently they lied, for Charley’s pals shows him signs that were printed up, charging everyone for use of that water. Now Charley is angry for he’s been lied to. And the Ringo Brothers come into the saloon calling Charley a rustler because all the cattle are gone from his spread. Now there’s nothing to it but a gunfight. After the lead has been thrown, and Charley is the only one left alive, his poker friends clear their conscious. You see, the deck they were playing with was marked, so they took Charley’s money to make him need the thousand dollars they were offering for the killing of the Ringo Brothers. And the missing cattle, well they took them, too, to make the Ringo Brothers suspect Charley of rustling. Naturally, since everything worked out, they give Charley his money back. And then set back down for more poker. Well, definitely an odd one, since one of Charley’s poker buddies was the sheriff. Guess the law just wasn’t exactly what it was supposed to be in the Old West. Hubbard’s writing in these old pulp yarns is excellent, and the stories are entertaining. My favorite of the three in this volume, however, is the lead story, THE MAGIC QUIRT. Highly recommended.


Author of SENORA SCORPION
Posted by Tom Johnson at 11:29 AM