Penniless, homeless and virtually lifeless, the vagrant “Doughface” Jack is about to discover that where medical marvels meet the mysteries of the human mind, amazing things happen. Like one of the comic book X-Men mutants, The Tramp acquires a capability beyond his imagination and without equal on Earth.
Riding the rails, Jack runs afoul of a local sheriff and ends up with a crushed skull. He’s as good as dead until a savvy country doctor performs a bit of medical magic. Jack wakes up to find that his brain has been drastically altered. He has the power to save lives—and destroy them—with a single glance.
Will Jack use his astounding power for good . . . or for evil? His journey of discovery takes him to New York and into the arms of a woman, who has a plan of her own. Together they’re bound for Washington, D.C., and a psychic adventure that could change the shape of history. 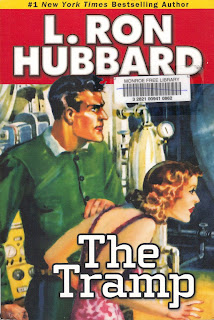 Doughface Jake, a hobo riding the rails, wakes up in a little town hospital, where the doctor literally had to sew his brain back together after cracking his skull. The operation not only saves his life, but it also gives him new abilities - the power to heal, or to kill. He’s not sure how to handle this new power, and the scientists don’t want responsibility for what he may do. After escaping from the police, he meets an old blind woman and heels her, but now things may get a little stranger.

Rita, the old blind woman had once been a young popular actress, but an accident caused her blindness, along with a destroyed face. Doughface makes her young and beautiful again, but 38 years of rejection from society has turned her against those one-time friends, and she wants vengeance now. She sees opportunity in Doughface, and leads him to the White House to take over the country. Now, the only one who can save America is the doctor who saved Doughface in the beginning, but he must die in order to do it.

This was an odd story for Hubbard. Usually his lead characters are heroic, and the romance is pure, but in this case we see a poor tramp elevated to the height of power, and the evil Witch Woman who controls him, while thousands lie dead in their wake. Still, it was an interesting yarn as only Hubbard can spin them. Highly recommended.


Author of WORLDS OF TOMORROW
Posted by Tom Johnson at 3:54 PM