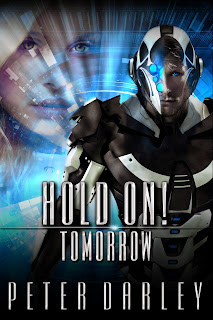 “The Action Never Slows Down.”

Twenty-six years after the death of Brandon Drake, his son B.J. dons the armor of The Interceptor. Brandon had died fighting his inner-self, The Scorpion, but now B.J. is called upon to resurrect Brandon’s good side, The Interceptor when an end-of-the-world cult, the Children of Tomorrow, cause worldwide disasters of apocalyptic horror.

The first three novels were written in Saturday Matinee cliffhanger style, each story ending with a thrilling cliffhanger (think Commando Cody). But this story is a stand-alone novel. Still, the novel is awash with the old matinee action and sudden danger to our hero and heroine. The suit is equipped with jets in the shoes, lasers in the hands, and robotic strength and speed. B.J. doesn’t have the hang ups that hampered his father’s Dr, Jeckle-Mr. Hyde (Interceptor-Scorpion) situation. Although he feels that his father is within him. This time the world must come together in support of The Interceptor if the planet is to survive, for this time the religious cult has technology on its side, and is as powerful as the world’s mighty superhero.

Call it comic book prose, or pulpy fiction, if you like, but this novel has the making of a good action movie, as well as a graphic novel series. In fact, we are told in the story that movies and comic books resulted from Brandon Drake’s earlier career. Plus we even have a song written for this latest book. And whatever you call the book, you have to admit there is never a slow down in the action. Highly recommended.


Author of THE MIND MASTER
Posted by Tom Johnson at 4:34 PM

Email ThisBlogThis!Share to TwitterShare to FacebookShare to Pinterest
Labels: Hold On!, Peter Darley, The Interceptor, Tomorrow