With the Primus Elites' training almost complete, Wil and his men relocate to H2 to make their final preparations. Everything seems to be staged for a swift TSS victory over the Bakzen as Wil assumes the position of TSS Supreme Commander with Saera and his most trusted friends by his side.
But, Tek won't let the Bakzen go down easily. He will find Wil's greatest weakness and do anything to make him crumble. The generations-old war began as a feud of races and ideals, but with this fight, it's personal.
Crossroads of Fate is the fifth installment in the Cadicle series. This character-driven novel chronicles the decisive space battles to end the war with the Bakzen so a new era for Tarans can begin. 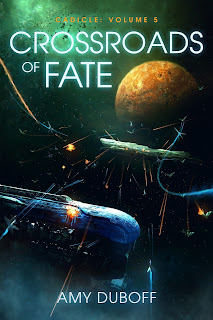 “World Building At Its Best.”

With the final war with the Bakzen at hand, Wil is promoted to Supreme Commander, and he leads the TSS in a calculated battle with their enemy, an enemy not truly an alien race. Wil is now aware that the Bakzen are clones of genetically modified Tarans created by the Priesthood, and it’s really the Priesthood who forced the clones out, making them enemies of those who created them. But the hatred of the Bakzens, against their creators cannot be dismissed with less than a war to destroy one or the other. But for Wil, this is something that might destroy him as a person when he’s responsible for innumerable people dying on worlds caught in the crossfire because of his actions. Can he live with the knowledge that his power and leadership is the ultimate weapon that will wipe out an entire race of people? Will he come out of this unscathed, even if he survives the battles? And what of his friends, his parents, and his wife, will they also be damaged by his actions?

Again, the author gives the reader a well thought out novel of mysterious forces moving people around a chessboard to reach a certain goal. It is world building at its best. The writing is smooth, and fast, with realistic dialogue, and memorable characters that you won’t soon forget. Highly recommended.

Tom Johnson
Author of WORLDS OF TOMORROW
Posted by Tom Johnson at 3:54 PM