Five average guys call themselves the Thursday Night Mafia and their weekly blackjack game appears to be innocent. But looks can be deceiving, as casual talk leads to a plot to scam Lake Tahoe casinos. Caught red-handed by mob goons and facing certain death if they don't repay a fortune, they turn to Rick. He uses their inside knowledge to commandeer a B-52 with nukes on board and hold it for ransom.
But the BlackStar Bomber holds Cold War secrets bigger than Rick's and a crack Air Force/NSA team, headed by the legendary spy Tupelo, races against time to hunt him down. His vengeful plan includes the destruction of Lake Tahoe and the death of thousands of people.
The Consortium, an intelligence organization born from the old Soviet system, schemes to help Rick auction off the nuclear weapons—including the deadly BlackStar system—to the highest bidder. 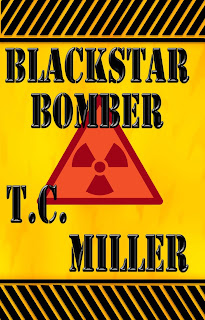 A Russian mole placed in America during the Cold War era contracts with an international organization to aid in a scheme to steal and sell nuclear weapons from an alert pad on Mather AFB in California. He has become friends with a group of ex military and civilian employees of the base, and during booze and poker games has found out enough information to pull off the theft, but first he needs to lead the card players into something that will force them to work with him on the theft. He sets them up on a “sure thing” of beating the casino that backfires, putting the men under threat of death from the Mafia if they don’t come up with money that disappeared from the casino (taken by the mole). Now comes the big scheme, if they will follow his plans, he will steal thermal nuclear bombs from Mather and demand millions from the government for their return, and they can escape, with his help, to another country.

The attack is set up nicely, with distractions in key locations, as well as drugs fed into meals of the security personnel, then easy access to the alert pad where B-52 aircraft are loaded with nukes on board. Problems arise on the back gate where AIC Joanna Davies is alert and quite capable of performing her security duties. She recognizes a situation and calls for back up by her security supervisor, Sergeant Jake Thomas. Both she and Thomas are trained in martial arts, with knowledge of defending the base against attack. She takes out one terrorist while Thomas takes out another, but the alert pad is now under control of the invaders. With control of the nukes, they soon make their demands known. Millions are moved into an offshore account, among other things as a bargaining tool. Or they will set off the bombs. Of course, while other things are set up for them – this is merely a distraction - the mole escapes through an underground tunnel system with the bombs.

The novel takes place at Mather AFB, California when the base was part of SAC Command. The dialogue talks about the end of the Cold War, as if it’s in the past, yet the Cold War ended in December 1991, and SAC was deactivated in 1992, and Mather AFB closed in 1993, so I’m a little confused concerning the time this story takes place. There’s just not a lot of room in the time we’re looking at. There were also a lot of highly unbelievable scenarios we’re asked to believe, such as a Security Police officer (Lt/Col) being used as a NSA or CIA field agent working as a spy in Europe during the Cold War (code-named Tupelo – his wife, an ex-AF OSI operative, and CIA agent code-named Delta), as well as a non-commissioned officer (sergeant rank) security policeman, also used as an asset for the CIA (or NSA, I wasn’t really sure who he worked for) whenever they have a mission for him. Well, that is why this is called fiction, though, so let’s overlook these minor things.

I loved the story because it involves military police (AF Security Police, in this case). I’ve known officers and enlisted men who were in SAC, however, and from all I’ve heard SAC was a monster. Once they had you in their grasp, you didn’t get out. Officers whispered, “Be careful what you wish for, you might get your wish.” Of course, we’re talking about rank, and the way to make rank was in command positions. That’s where the warning comes in. Colonels are moved into base and wing command slots in preparations for their first star, but that star could be fleeting, and careers ended easily by merely failing an ORI (Operational Ready Inspection) rating, or an incident that brings attention to them. The incident in this story would have caused heads to roll, including the Base Commander, Wing Commander, Provost Marshal, and many there-in. It is highly unlikely the security police would have been sent off base chasing across California after the terrorists attempting to retrieve the stolen nukes. It just wouldn’t have happened. The base would have been locked down tight, and everyone left in high security alert until those nukes were returned and the situation back under control. In fact, there would have been more FBI/CIA/NSA/ and Secret Service involved than just a couple AF cops, and two NSA agents. But this is a fun story, and I enjoyed the heck out of it. Forget the impossible scenarios, and just accept the story for what it is. Fiction. Highly recommended.