Night of The Owl

1946: World War II is over and the world is changing. While the Axis has been defeated, a new menace threatens the globe: Communism. When industrialist Owen S. Grane is brutally murdered, the Three Musketeers, America’s foremost superheroes, are called in to find the culprit, who attacks and kills like a wild animal. Was it the Soviets? A spurned lover? A cheated business rival? Or someone else? One by one, upper level executives of the S.M.A. Corporation, an American defense contractor, are attacked and killed in a savage manner, until, finally the Owl reveals himself – but only after a cat-and-mouse game with the Three Musketeers. 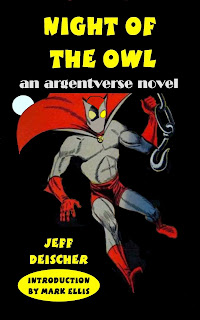 After the end of WWII, the mighty Golden Age heroes came home to end their career saving the world from Nazi aggression. Although, three of the heroes still gathering at the Round Table, and calling themselves The Three Musketeers, are Hunter, Blitzkrieg, Compatriot and his sidekick, Buddy. They work with F.B.I. agent Billy Troy, who keeps them informed on what is happening. The rest of the super heroes and super villains are either dead or retired now.  Agent Troy brings news of the murder of the head of S.M.A. Corporation, who was ripped to shreds, and probably tortured. Plus, there was a weird flying creature spotted nearby.  The Three Musketeers are asked to investigate.

This was a fun story, almost reading like a pulp story, but with comic book super heroes and a new villain, The Owl. The author, an expert on Golden Age and Silver Age comic book history, brings characters together in his Argentverse. And whether you read this as fan fiction, or new genre, what you get is old versus new in a brand new package that will resonate with not only comic book fans, but fans of well written action yarns with good plot devices. Although I grew up reading Golden Age comics as a child, and Silver Age comics as a teen, I am not versed in their history, nor did I read them all, so the author was speaking to a mere initiate not a master of the subject, yet he was able to spin a fine tale of light mystery in this comic book prose. There is an explanation about the Argentverse at the end of the book for new readers like myself. Highly recommended.