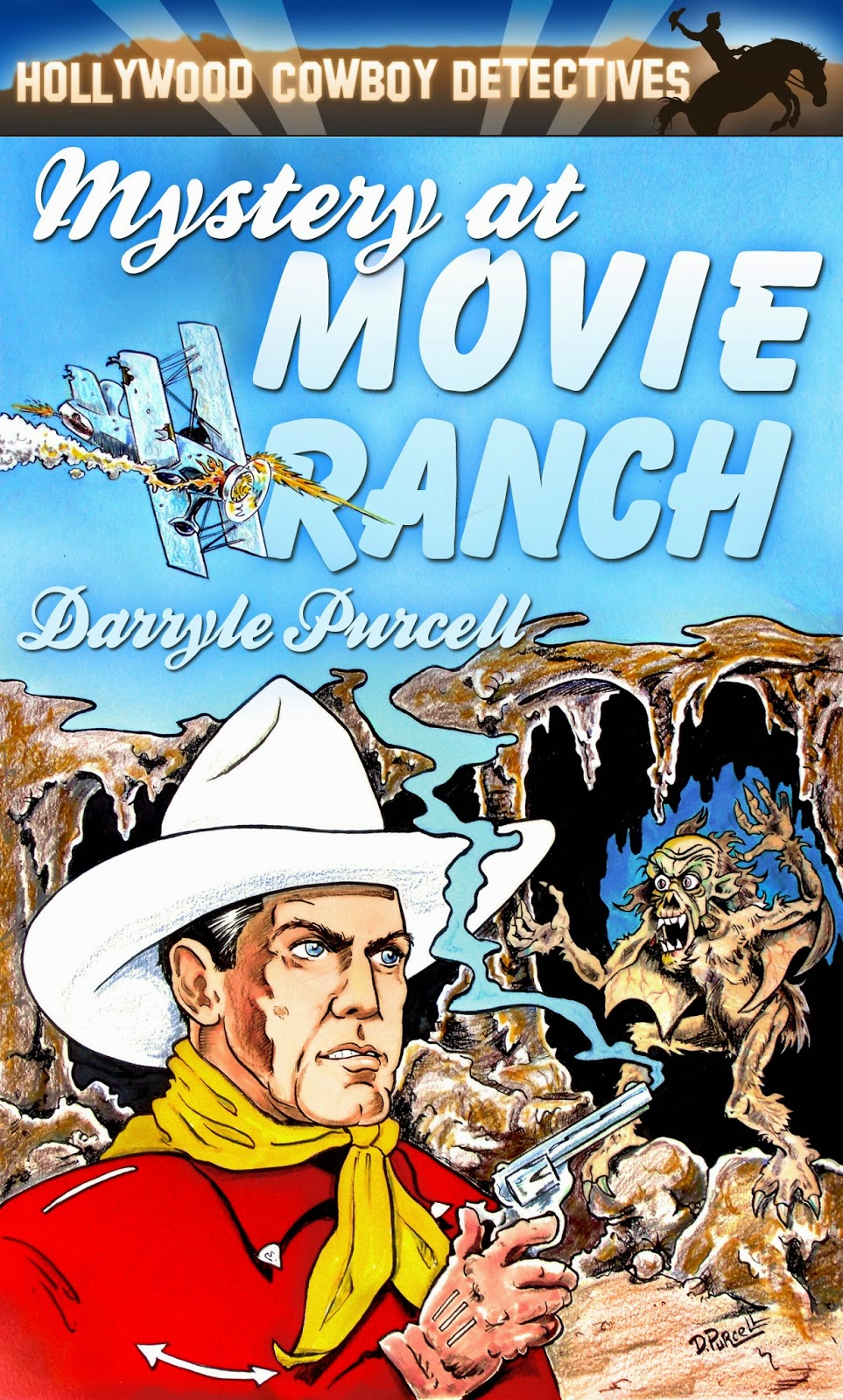 The illustrated Hollywood Cowboy Detectives (HCD) series, published by Page Turner’s Buckskin Editions, embraces the adventurous world of pulp publishing while also saluting the great western movie serials of the 1930s. The first publication, Mystery at Movie Ranch, is comprised of 12 cliffhanger chapters set in the San Fernando Valley area of southern California during the filming of the 1934 Mascot Pictures serial, Mystery Mountain, starring Ken Maynard.
Sean “Curly” Woods, former Los Angeles Examiner crime beat reporter and current studio flack, is the main character who appears in all HCD publications. In Movie Ranch, Woods’ assignment is to write fluff public relations articles about the serial and its stars and keep Maynard out of trouble while looking into the possible sabotage of the Mascot production.
While helping Maynard battle his personal demons, Woods discovers real enemies are not only targeting the western production, but the American way of life. Joined by western movie hero Hoot Gibson, Maynard and Woods engage in a series of deadly encounters with an army of anti-American terrorists ruled by a sinister mastermind known only as the Viper. The Hollywood Cowboy Detectives deal with organized crime, a sniper attack, aerial combat against an experimental German flying machine, interrogation by a sadistic enemy scientist in an underground stronghold, an ungodly creature who is the product of sadistic experiments, and a variety of battles with those who would eliminate all who believe in freedom and justice.
The Kindle version of the Mystery at Movie Ranch can be purchased on Amazon for $1.99. But for those of us who like our pulps printed in ink on paper, a paperback version of Mystery at Movie Ranch can be purchased at Amazon.com for $8.09, which includes the bonus HCD short story, Mystery of the Murdered Badman. In that short story, Woods works to save Maynard from being charged with the murder of a western-movie villain and abduction and possible murder of a former silent-screen vamp. All HCD publications have color covers and black and white internal illustrations in the style of pulps and adventure novels of the 1930s.
The illustrated Mystery of the Arizona Dragon is also currently available as a Kindle download from Amazon. It will soon be a paperback with the bonus HCD short story, Mystery of the Dragon’s Revenge.
In Arizona Dragon, Woods is sent to a western Arizona dude ranch to investigate problems while the cast and crew of Charlie Chan Goes West prepare for filming. Hoot Gibson, Warner Oland and Keye Luke join the HCD hero as he attempts to track down the source of a variety of deadly incidents.
I spent many years working in daily newspapers as everything from an editorial cartoonist to a managing editor. I also toiled as a government flack for a county in Arizona, an illustrator of educational comic books, young reader books and teaching aids, and a layout and character design artist for Saturday morning television cartoons. 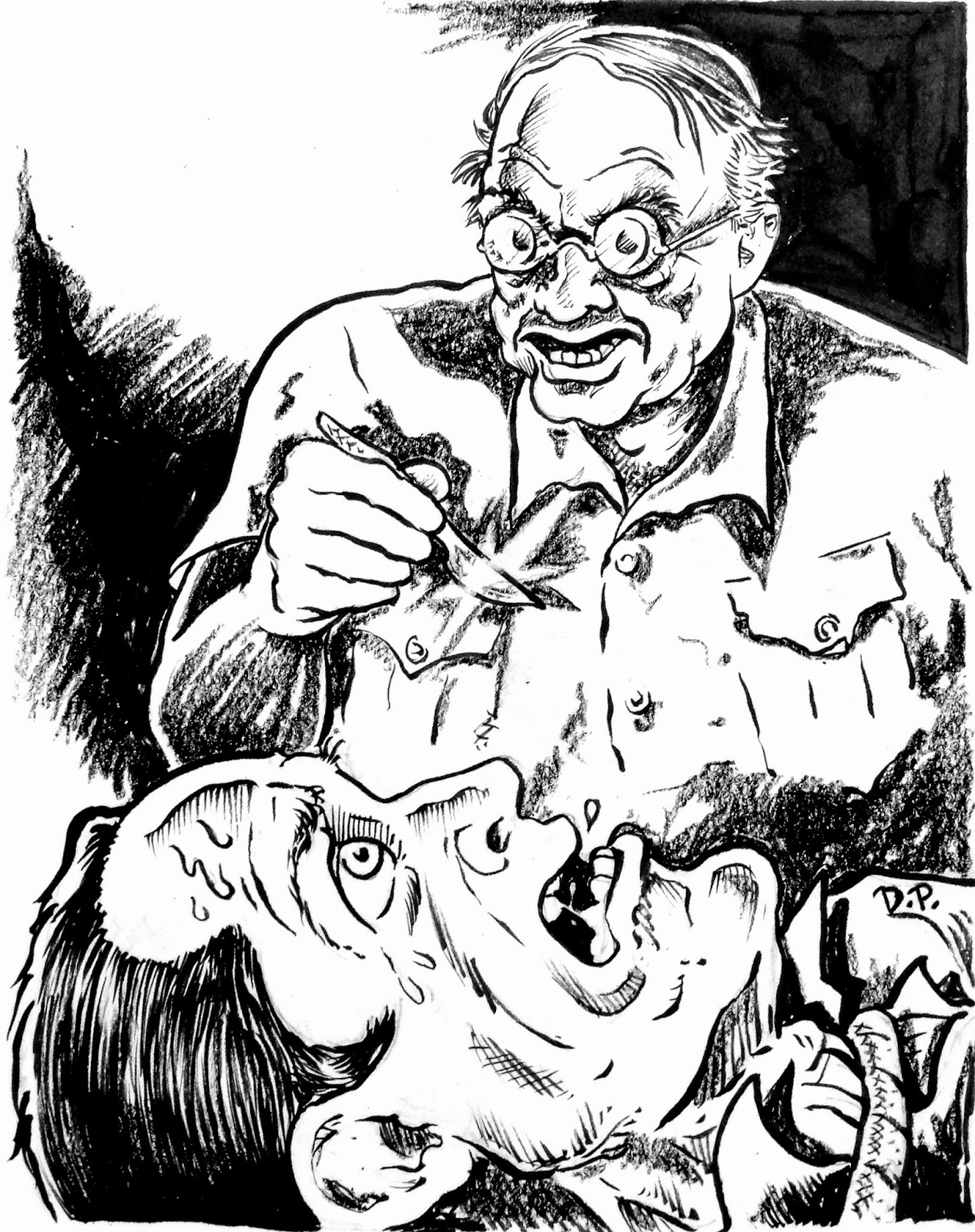