Who Is Killing The Great Capes of Heropa? 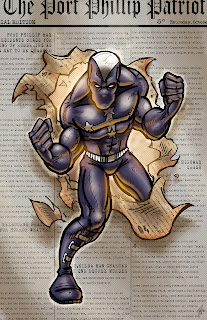 Southern Cross art by Paul Mason
WHO IS KILLING THE GREAT CAPES OF HEROPA?
(Sneak preview of an upcoming novel from Andrez Bergen, via Perfect Edge Books).)
With this novel, we are taken into dystopian future Melbourne, Australia — the last city on Earth. Melbourne is not a nice place to be, a polluted, dangerous and divided place labouring under totalitarian rule, where citizens are just as likely to be ‘disappeared’ by the state as to succumb to some environmental hazard or crime.
But we visit this city only fleetingly — most of our time in the novel will actually be spent hooked up to an IV drip and electrodes, with our consciousness lodged firmly in a virtual world called Heropa.
The contrast between Heropa and Melbourne forms a vivid counterpoint in the novel.
Where Melbourne is decaying, filthy and dying, perpetually steaming under an acid rain, the towers of Heropa positively gleam under cloudless skies. Think of a comic-book Manhattan of the 1930s, with elements of the ’40s, ’50s and occasionally the ’60s woven in for good measure and all ramped up Gotham-city-wise. Newsrooms bustle and buzz, the pavements are awash with swarming crowds of busy inhabitants, everyone wears hats, the women wear gloves and fitted dresses, all manner of fabulous vintage vehicles and trams ply the roads and heroes and villains do daily battle among the towers to gain the upper hand.
Heropa is a city filled with two classes of being: the Capes, who are heroes or villains — real people hooked in via remote link — and blandos, or phonies... apparently sentient humans who form the vast majority of the world’s population. These are artificial people with a small ‘p’ tattooed between their shoulder blades, and who go about their daily business as alternatively beneficiaries or victims of the struggle between the Capes.
Bullet Girl art by JGMiranda 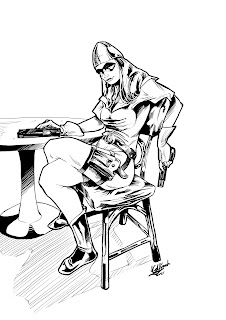 The Capes are the main event in the city, and their battles and stoushes frequently extinguish numerous blando lives and destroy much property, only to have everything snap back into place at the midnight ‘reset’, ready for another day. The battles between the Capes are something of a ritualised affair; not so much in earnest as in a grand tradition of move and counter-move, the comic-book-like destruction staying within some predefined limits. That’s the theory, at any rate.
But something has gone wrong in Heropa.
The reset has stopped working, and injury and damage are becoming permanent. For the first time, Capes are being killed, violently obliterated in Heropa, and left as brain-dead husks in Melbourne.
The novel follows fifteen-year-old protagonist and comic-book afficionado Jack, known in Heropa as the hero Southern Cross, as he weaves his way through the city, attempting with his fellow heroes (the Equalizers) to determine who is killing the great Capes of Heropa — while trying to avoid being killed themselves.
In this case, we get to know the young Jack from before he enters Heropa; we first spend time with him in Melbourne, a poignant and solitary existence, his family imprisoned by the state, where he wrings as much joy out of a cache of comic books as he can. We go with him as he is introduced into an adult world — albeit a strange, virtual world, where he wears a skin-tight costume and mask on his muscled virtual adult body.
We follow Jack as he then finds companionship in an unexpected quarter, in such contrast to his solitary and neglected life in Melbourne, and we also get to know his fellow Equalizers as they emerge in the narrative as characters with hearts and minds, despite their flamboyant comic-book appearance.
And then there’s the sideways exploration of the nature of artificial intelligence. Can we fall in love with someone who is not real? What does it mean to be ‘real’ anyway? The questions raised remain tantalisingly unanswered.
Pretty Amazonia art by Juan Saavedra 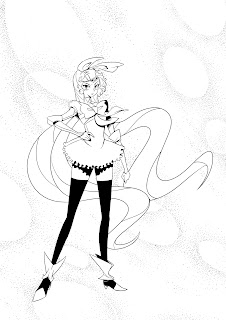 With thanks to Marcus Baumgart @ The Ink Shot
Look out for this novel later in 2013.