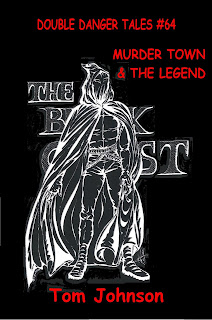 Unfortunately, his luck was running out. He heard a light sound from behind, a short sigh from Peggy, and then he felt the cold hard steel of the barrel of a revolver digging into his spine. A vicious voice grunted from behind, "Drop your cannons, friend, or this girl gets a bullet in the head!"
Now available on Kindle for $.99. For the eBook edition we've gone with a different cover than the print copy, which is still available from Fading Shadows at $10.00 postpaid in the U.S..
Posted by Tom Johnson at 4:20 PM