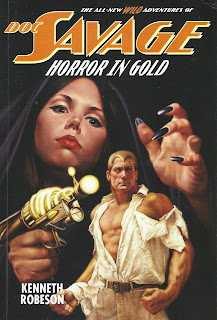 By Kenneth Robeson (Lester Dent & Will Murray)
ISBN #978-1618270238
Altus Press www.altuspress.com/
309 Pages
Price: $24.95
Rating 5-Star
A sudden wave of deadly explosions in New York brings Doc Savage into the case. The heads of innocent people explode. Hands or fingers fall from their body. It appears that someone is using a machine to make gold explode. Bank vaults are destroyed. Gold becomes too dangerous for people to own. A mysterious woman is seen in a purple robe with what looks to be a newsreel camera at every scene. The first 200 pages of the adventure take place in New York, but moves to Alaska for the final 100 pages where a mysterious scientist, John Merlin is working near a volcano. He is the inventor of the machine that is causing such havoc in New York.
This is another topnotch Doc Savage adventure Will Murray has put together using notes left by the late Lester Dent. There was some dialogue and text that seemed very odd. It just did not sound like Dent or Will Murray at times. Sadly, Pat is ordered, over the telephone, to Florida and doesn’t make an appearance except by radio at the end of the story, which was another disappointment for me. Evidently, Pat isn’t scheduled to be in the next story, either. Also, Renny and Johnny are in Alaska and don’t join the team until the last 70 pages of this 300-page adventure. Nor would Dent have Monk actually strike Ham in anger, which he does at the end of Chapter 19!
Of the two stories so far, “Desert Demons” is my favorite. With all the oddities in this story, I couldn’t help but wonder if Murray isn’t giving us a peek at what’s to come with Doc’s new image? But that being said, everything about “Horror In Gold” is another fantastic adventure of the Man of Bronze, and highly recommended.
Posted by Tom Johnson at 11:16 AM