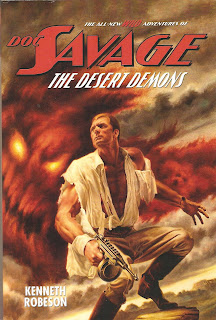 By Kenneth Robeson (Will Murray & Lester Dent)
Altus Press www.altuspress.com/
ISBN #978-1618270016
Price: $24.95
270 Pages
Rating: 5-Stars
After twenty years, Doc Savage and his crew are back to fight evil and punish evildoers in a brand new adventure. Using notes from the late Lester Dent, Will Murray brings a rip-roaring, fast-action, grand slam tale for readers of the Man of Bronze. Something like a red tornado is descending on people, planes, and automobiles, turning them into salt. Doc, while at his Fortress of Solitude sends his aides to California to investigate. Meanwhile, his adventurous cousin, Pat Savage is already there. And to make matters worse, it appears the demon has killed her.
Doc and his aides are in top form, and Murray’s writing style captures Lester Dent’s perfectly. Six more novels have been announced, but Murray says there will probably be more. A special note should be made of the fantastic cover by Joe DeVito. It’s great to see the Man of Bronze, Monk and Ham, Pat, and all the gang back in this new series. Highly recommended.
Posted by Tom Johnson at 10:48 AM