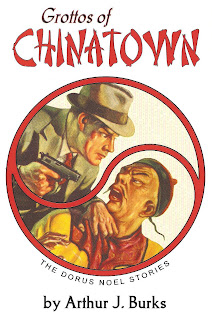 By Arthur J. Burks
ISBN #978-1935031086
Off Trail Publications
189 Pages
Price: $16.00
Rating 5-Star
After returning from the Far East, Dorus Noel becomes an undercover agent for the police department in New York City. He had spent years in the Far East, and had the torture scars to prove it. But once touched by China, he was unable to give that world up. Manhattan's Chinatown contains the most insidious crimes and criminals imaginable, and is a society of strange alliances, a place of dark menace and mystery. It is an urban nightmare of secret passageways riddling the district like rabbit warrens, a new world under the shadow of China's past.
This volume collects the eleven Dorus Noel stories from the pulp, All Detective Magazine (1933-34). Also included is extensive new information on All Detective and the fascinating career of pulp-writer Arthur J. Burks by John Locke.
Burks’ stories are short, with little time to truly examine the characters, but they are presented with clear images of evil. Fu Manchu like masterminds, with insidious murder inventions, including mysterious poisons and venoms, along with unimaginable death traps. All Detective aimed at the short story, with strong villains and heroes, and endings with a twist. The author was a retired Army Lt/Col from WWI who had traveled extensively in the Far East, and brought his knowledge of the East to the stories with him.
Dorus Noel works for a mysterious “Chief”, whom he has never seen. He does know the police commissioner, but none of the police know he is an undercover agent. However, all of Chinatown knows who Dorus Noel is, and though most respect him, the oriental villains fear and hate him. In each story someone is out to kill him before they start their insidious crime wave.
A great read, and thoroughly enjoyable.
Posted by Tom Johnson at 7:16 AM