TARZAN AND THE CAVE CITY 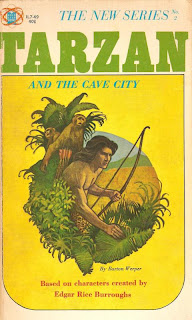 I thought, for a change of pace, I would post the cover of a 1964 Tarzan novel by Berton Werper. This five-book series ran from 1964 to 1965, and was written by husband and wife writing team of Peter & Peggy O'Neill Scott. Although I wasn't a fan of the new series at the time, I have to admit it was probably better than the new series now coming out of England.
Posted by Tom Johnson at 12:43 PM