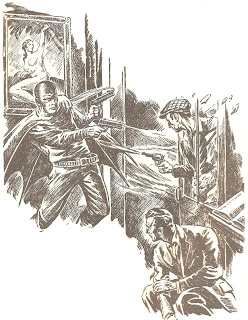 This is the real version of the Black Bat as created in 1939 by Norman Daniels for Black Book Detective. Norman told me, however, that in 1943 the decision came down to turn The Black Bat into a character more resembling Walter Gibson's The Shadow, so the costume was dropped in "Markets Of Treason", Winter 1943/44. From then on, The Black Bat merely wore dark clothes and a hood, the ribbed-cape a thing of the past.  The artist must have never got the word, as they continued illustrating the interiors with the character in full costume. In the final novel, "Hot, Willing, And Deadly", author Stewart Sterling even dropped The Black Bat as well, merely having Tony Quinn (no longer pretending to be blind) investigate the crime. But it was always the character in cape and hood that I remember most fondly.
Tom
Posted by Tom Johnson at 7:30 AM