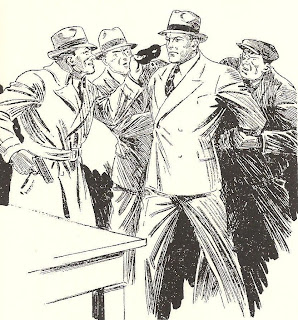 Did The Phantom Detective Wear A Costume?

Actually, no.  He was a master of disguise, and often took on the identity of hoodlums. His identifying trademarks were the domino mask and jeweled badge. In the early 1930s, Richard Curtis Van Loan was usually at a ballroom when some insidious crime occurred. As a rich young man-about-town, he was likely to be dressed in top hat and tails (tuxedo). He would merely put the domino mask on and flash his famous badge, becoming the nemesis of the underworld. But just as quickly, he would discard the top hat and tails, and take the identity of some low-life criminal. As the series progressed, the setting of a ballroom to begin the story was left behind, and so too the top hat and tails. One of the problems with a recent version of the character was giving him the costume of top hat and tails. This happens when you don’t know the character. Whoever proposed the silly costume should actually read the series, and then we would get a true version of The Phantom Detective.
Tom
Posted by Tom Johnson at 9:08 AM