Guns Of The Black Ghost 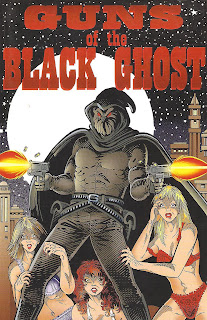 The vast chamber was suddenly filled with a mocking laugh as the Black Ghost issued his challenge to gangdom, and the weird mirth rose to a high crescendo, reverberating throughout the building, echoing like a wild thing in the silent void of space. Gang members suddenly stopped what they were doing, and looked about the shop like hunted animals on opening season in the woods. And then a chorus of shouts rang out as they spotted the intrepid fighter in black. “The Black Ghost!” burst from a dozen lips at once, and murderous hands dug for guns beneath their tunics.

Gunfire suddenly blazed as those weapons came up, but the Black Ghost had drawn two heavy automatics of his own, and the machine shop was thundering with the clash of guns as a battle began between gangland and the fighter in black. A wild volley of bullets sang like angry hornets disturbed by a farmer’s deadly spray of insecticide.

The Guns of The Black Ghost is Tom Johnson's tribute to Walter Gibson and his creation, The Shadow.
Trained by a retired secret agent of the government, Jimmy Malone dons a black hood and cape sending fear into the hearts of evildoers, as he battles the underworld in the tradition of a modern day Shadow or Spider. Burning eyes, a mocking laugh, and blazing automatics announce his entrance into an affray. Gangsters cringe when they come up against the guns of the Black Ghost!
Posted by Tom Johnson at 9:45 AM