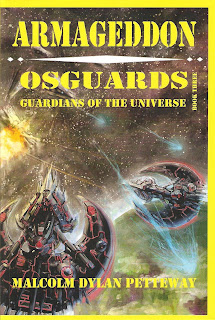 By Malcolm Dylan Petteway
ISBN #0984364528
Rage Books www.ragebooks.com/
328 Pages
Price: $15.50
Science Fiction
Rating: 4 & Half-Stars
“Entertaining novel with vivid imagery!”
With this third entry in the Osguards series, the Tuits invade the protected zone of the Universal Science, Security Trade Association of Planets (USSTAP) eliminating everything in their path with a weapon capable of destroying planets. They make their first strike, wiping out a solar system with five planets. Killing thirty-five billion people in less than ten minutes! The Guardians of The Universe find themselves outnumbered and faced by superior weapons!
The author, a retired AF officer, brings his knowledge of tactical weapons and strategic military background to the series in creating the universe of the Osguards: Guardians of The Universe. The story is well written, and the characters come to life. Battle scenes are fast and furious, with vivid descriptions. My main problem with the story was my own fault. I read the first two novels in the series years ago, and have read hundreds of SF books since, so my memory of the previous entries was foggy, the characters not as clear as they should have been. This is a series the reader needs to read in sequence, and not with a long lapse of time between each story. I also felt there was too much of the story taking place on Earth, when the action should have been kept in space. For instance, when the Tuits destroy the five-planet solar system with thirty-five billion inhabitants, the reader is at a wedding on Earth. True, we are learning more about the characters, and Earth does have a role in the story, but I felt the action is unnecessarily slowed down to lengthen the book. Being a military science fiction novel, especially of this length, it should have had more space battles and less inaction to keep the story moving. Still, the author spins an exciting tale, and the Osguards have a fascinating history, with an even more interesting future.
Although each book is a stand-alone novel, I highly suggest the reader start with the first novel in the series. These are thick volumes, and the price is right, so begin reading them today!
Posted by Tom Johnson at 6:58 AM