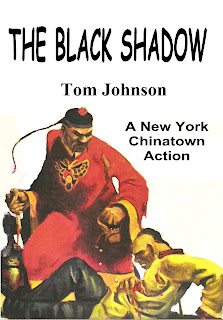 Now available for $.99 on Amazon Kindle.

Chu Chul, the evil Chinese mastermind, thought to be long dead is back to win the throne of China. But first he vows to kill his mortal enemy, Dorus Noel. After Chu Chul robs a Korean temple of valuable treasures to finance his army, a mysterious assassin appears in New York’s Chinatown to assist Noel in his battle with the evil Chinaman. Could The Black Shadow be Dorus Noel’s new houseboy? Go with Noel and Kim Young Ju, as they search for the mastermind’s opium den while the cloaked figure of The Black Shadow watches over the dark streets of Chinatown.
Posted by Tom Johnson at 5:53 AM