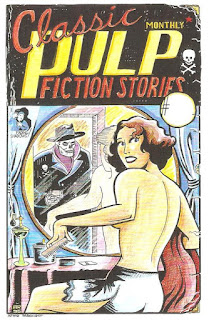 I often hear that New Pulp started around 2005, with never a mention of how it actually came about. New Pulp, so called because it tries to emulate the original pulp stories of the 1930s & ‘40s, began around 1994 with the publication of Will Murray’s new Doc Savage novels, and Jim Van Hise’s new novelettes featuring The Spider and Operator 5. At least we felt the water getting warm at that time. 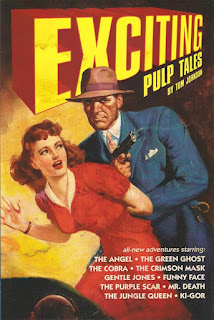 In February 1995, Clansy O’Hara published the first issue of a new small press pulp magazine titled, PULP FICTION, beginning a short run of pulp type fiction, then in June 1995, Tom & Ginger Johnson released CLASSIC PULP FICTION STORIES, the first of several pulp titles in small press format, and the New Pulp was in full swing. For the next nine years Tom & Ginger published a string of titles, which included CLASSIC PULP FICTION STORIES, DOUBLE DANGER TALES, ALIEN WORLDS, STARTLING SCIENCE STORIES, WEIRD STORIES, DETECTIVE MYSTERY STORIES, and EXCITING UFO STORIES, as well as several reprint magazines like ACTION ADVENTURE STORIES & BEHIND THE MASK. All the magazines were in the pulp tradition. New writers were turning out new stories of The Phantom Detective, The Black Bat, Ki-Gor, The Masked Rider, Jim Haitfield, Doctor Death, and many others. The series all came to an end in 2004, but in 2005 Ginger collected the first of four anthologies titled, TALES OF MASKS & MAHEM, continuing the new pulp theme, but this time in modern POD technology. 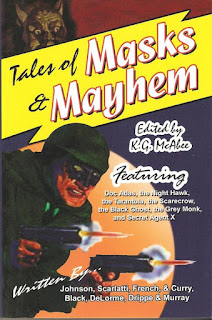 Today, there are many publishers involved in New Pulp, including Wild Cat Books, Airship27, Altus Press, Pro Se Press, and NTD, among others. But the innovation began with Clancy O’Hara and Tom & Ginger Johnson in 1995.
Posted by Tom Johnson at 5:23 PM