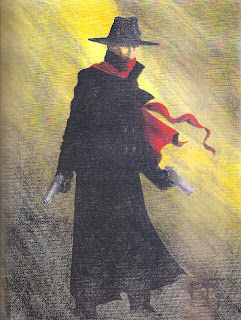 Here is the cover we used on ECHOES REVISITED, our 20th Anniversary issue of Echoes Magazine. The cover is by David Burton. We had 100 copies printed at Office Depot in 2002, but only sold a handful, taking a big loss. That means we still have a lot of issues stored. Copies are still available for $20.00, plus postage. Contact me, if interested. And coming very soon, ECHOES 30, the 30th anniversary book of Echoes. This is being published in POD CreateSpace by Altus Press, and well over 300 pages. Everyone is aware of the quality of Matt Moring's books, so the 30th anniversary book will be a must for pulp fans and old Echoes subscribers, as well as the new pulp fans. Lots of in-depth articles and pulp cover scans. More later.
Tom
Posted by Tom Johnson at 8:38 AM