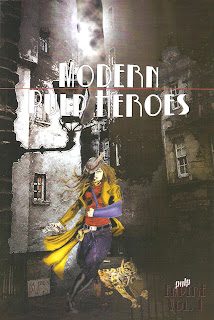 E 31 by Terry Alexander is a nice entry concerning the experiments in transferring mind control from humans into animals. Naturally, such a discovery could have many aspects, and worth millions. It could also lead to murder. This is an exciting, and entertaining story. Excellent plot but lacks good characterization.

Toybox Warrior by Teel James Glenn is an interesting tale, to say the least. A boy genius is being used by the military to create new strategies for war, but he needs a tutor to assist him in the “games”. Retired Marine Major Deacon Furie applies for the job, and then learns the real story behind the boy’s power. Well written, exciting, entertaining, and top notch.

The Commander of Knights by Caine Dorr. Uh, I’m not even sure this constitutes a real story. Commander Knight and his driver, Mac, leave the giant skyscraper on a “mission”, but in the parking garage find there has been an accident and they can’t get to their car. It’s a trap, but after a lot of shooting, and Knight muscling the so-called wrecks out of the way, they are quickly on the way. Evidently, they have a tracking device in the car and know who they are after. Catching up to the car, another fight ensues, Knight gets his shirt ripped a la Doc Savage, and they rescue a German girl. A lot of action, but it read more like fan fiction than a real story.

To The Mountaintop by Jeff Pawlak.  Great boxing story, in this case MMA – mixed martial arts, in which a young fighter is just now reaching the top ranks in the profession. However, he’s now facing tougher competition, and during a three-fight contest, he breaks his hand during the second bout. Now he must prove he really wants to move up in the sport. Whether boxing or martial arts, this was a well-written and entertaining story. Top notch.

Return of The Blade by Steven Gepp. A long line of family “punishers” is using a sword to whack off the hands of criminals in the act.  From grandfather, to father, and now the son, an Australian calling himself The Blade seeks justice.  This one had more potential, but was a bit too short. I would have liked to see more of the story.

Sisiphus Komplex by Joe Mogel. Okay, let’s see if I got this right. The Devil turns two Nazis into zombies, and offers them freedom once they kill so many evil people – and save so many good people’s life. Plus, they have comic book super powers. But in the end, the Devil has his true plans, which they don’t really understand. Maybe this would have worked in a comic book, but it felt out of place in this anthology. Plus, the over-use of German in the dialogue was too distracting for a good read.

Maximum Death by Viktor Kowalski. While filming an action spy movie in South America, the lead actor Charlie Porter is entangled in a real spy case when an undercover cop plants a microchip in his pocket while running from the Cartel. The best story in the volume by far, and the most exciting. Top notch!

Domino Reborn by Nicholas Ahlhelm. On Fiona Hazzard’s return to America from London, she learns of the murder of her parents. Strangely, at the funeral a 90-year old woman tells her she is Ellen Patrick, Fiona’s great-great grandmother. Ellen gives her a black domino mask and asks her to assume the role of her old self, the Domino Lady, in order to bring her parents killers to justice. The indication is that Ellen married Captain Hazzard (duh!), thus the name of her descendants. This was a hard story to get through, and read like a fan fiction piece, plus the story doesn’t end – we’re supposed to buy the next issue (huh?).

This was a mix match of stories, four were pretty good, a few actually topnotch, but the other four were mediocre at best; two even read like fan fiction instead of professional stories.
Posted by Tom Johnson at 3:10 PM