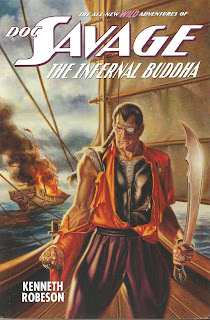 During Japan’s occupation of China, a Buddhist Monk discovers a weapon so destructive it could bring the world to disaster. When Mark and Mary Chan escape with a “toe” of the deadly “thing”, it starts a rollicking adventure that will soon bring in the Man of Bronze, Doc Savage. But before even the mighty superman can save mankind he encounters pirates, cutthroats, and the Japanese fleet.

All I can say is wow! The book starts out with a fantastic cover by Joe DeVito, and then heads full steam into the action, never ceasing in wild adventure to the final page. Even Doc Savage is captured numerous times, and seems destined to fail at every turn. The author’s writing is superb, and he has taken Lester Dent’s notes and turned them into one of the best Doc Savage adventures to-date. We may have loved Lester Dent, and his creation Doc Savage, and the formula he used for the adventures were fantastic, but I think Will Murray has succeeded in turning Doc Savage into his own.

“The Infernal Buddha” lives up to all the expectations. The best so far!