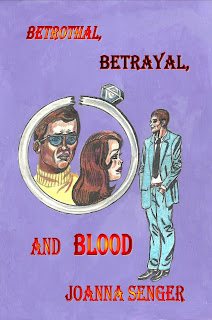 By JoAnna Senger
NTD www.bloodredshadow.com
ISBN #978-1-937769-08-6
Price: $15.50
205 Pages
Rating 5-Stars
“A Smooth And Entertaining Read.”
In San Tobino, a small town on the Central Coast of California, the popular resort hotel, Milady’s Manor becomes the scene of gruesome murders. Leads are few in this sleepy little community, and the police are stymied. It seems the murders are set up to follow the popular rooms different décor. The DinoWorld Room is set up as a prehistoric landscape, and then there are the Marie Antoinette Room, the Gibraltar Room, and the Lucretia Borgia Room. Each murder is enacted according to the rooms’ décor. What could be the motive, the authorities wonder?
The negatives of this book are cosmetic for the most part. There is little mystery, as we meet the killer before half way into the book. However, even that wasn’t necessary. The title alone tells us the plot. If it didn’t, the cover would have. A broken wedding ring, with a husband and wife inserted within the circle of the ring, and a handsome stranger standing alone outside the ring’s perimeter.  If I had seen this book on a paperback spinner rack, I would have passed it by for I knew the story without opening it. And that would have been a shame.
The author’s writing is superb, and the story keeps the reader’s interest from the opening page to the final chapter. We follow the police investigators, as well as the sordid adulterous affair that leads to the gruesome murders. An added compliment to the tale is the diary entries of a witness. Another nice aspect is the inclusion of a female private detective, and I would be surprised if we don’t see her in future novels of her own series.
The plot is good, though over-used in these type crime novels, but Ms Senger’s story-telling ability, and characterization is what captures the reader throughout. I can’t help but wonder what a new title – say, “Murders At Milady’s Manor”, or a simple “Murder In Room 313”, and a cover illustrating the crime scene from one of the picturesque rooms would do for the book? But with or without a cover, this novel is topnotch, and well worth the read!
Posted by Tom Johnson at 4:42 PM