Return Of The Shadow 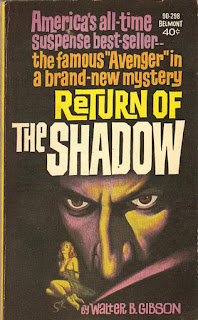 In 1964, the US Army sent me and other soldiers to an Air Base in Turkey during a NATO Exercise - during the Cypress Crises. At the time I was reading spy novels, but had just got hooked on Edgar Rice Burroughs. A friend thought I would be interested in a certain paperback on the rack at the AFB Stars & Stripes store. That paperback was Walter B. Gibson's "The Return of The Shadow", and my friend was correct. I was instantly a fan of The Shadow from that point on. This is the cover of that very paperback I bought at the Stars & Stripes, still in my book collection. I understand that Tony Tollin, of Sanctum Books, will be reprinting this lost gem in 2012, with interior artwork this time by Mike Kaluta. I will probably buy the new edition, but that old Stars & Stripe purchase will always be on my bookshelf.
Posted by Tom Johnson at 10:49 AM

Email ThisBlogThis!Share to TwitterShare to FacebookShare to Pinterest
Labels: Stars And Stripes, The Shadow, Walter B. Gibson