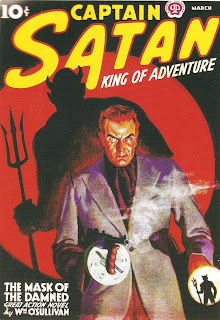 Captain Satan was a short-lived pulp hero series from Popular Publications, only lasting for five issues. Written by William O'Sullivan, it featured a Robin Hood type, young rich man about town, who robbed from crooks. However, instead of giving to the poor, he divided the spoils between himself and a strange assortment of assistants. Oddly, except for his lieutenant, Slim, some of the aides disappeared after only one or two appearances. An F.B.I. agent suspected who Satan really was, but never caught him.
Posted by Tom Johnson at 8:29 AM