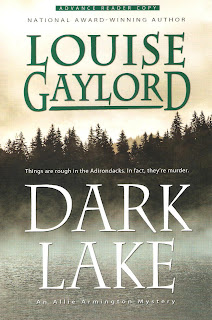 By Louise Gaylord
ISBN #978-0984144198
Little Moose Press
191 Pages
Price $16.16
Rating: 4-Stars
“Well-written and smooth reading!”
Allie Armington, Houston lawyer and private investigator, returns to the Adirondacks for the summer festivities with her family, but upon arrival finds murder instead of pleasure. Her favorite aunt is lying face down in water, and her cousin is hooked on Meth. The town fathers don’t want unwelcome attention to hamper the festival, and force the authorities to declare the death a suicide. Allie is determined to prove it’s murder, and to bring the guilty party to justice.
This novel was so smooth, and easy to read, I was at the end before I knew it. It’s a very nice story as well, but weak as a murder mystery. Allie really does nothing to solve the case, except walk around wondering who the murderer is, and who can she trust. I knew the killer as soon as the person was introduced, and figured out the set up, but not why it was necessary to kill Allie’s aunt. The police are pathetic, most under the control of the town fathers, one just wanting to bed Allie. At the end of the story, she merely asks the murderer why he killed her aunt, and he confesses. So much for great detective work. For the readers, the killer explains everything to us. The police arrive to make the arrest, and the local town folks thank Allie for solving the crime, though the police likely knew by then.
The reader won’t be challenged in this mystery, but it is well worth the few hours of reading pleasure they will get from such a well-written story.
Posted by Tom Johnson at 5:50 AM