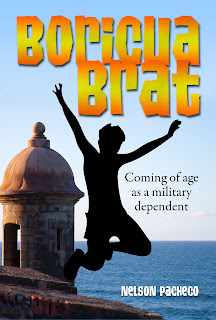 “Coming Of Age As A Military Dependent”
By Nelson Pacheco
ISBN #978-1611560008
190 Pages
Bookbrewer http://bookbrewer.com/home
Price: ebook $2.99
Rating: 5-Stars
“So the soldiers went overseas, accompanied by their families, cars, barbecues, cats, and dogs. We were the kids that went with the package.” The Author
This novel is a wonderful chronicle of a young dependent growing up as a military dependent. And for someone facing a brand new language, there was even more difficulties. That he succeeded successfully is evidence of his determination. From Puerto Rico to New Jersey, and finally to southwestern France, the author grew up in a Dorm at Poitiers, four hour’s drive from his parents, who were stationed at St. Nazaire. The Army bussed the Dorm kids home on weekends to spend a few days with their parents every Friday, but from Sunday night until Friday afternoon, their home was a small room shared with three other boys in a two-story building. Boys were in one wing, the girls in the other, both had Dorm supervisors to keep order. Some of the lucky few were living in homes off Post with their parents, if they happened to be stationed near the school. At Poitiers, the High School was located in a compound named Camp de Chalon, which also consisted of a military hospital, and a 9-hole golf course and athletic field.
I was an Army MP at Poitiers and had occasion to interact with students and teachers, and constantly marveled at the young men and ladies who attended school while I was there. The reader will be fascinated by their way of life as they read through the author’s reminiscences of his four years of Dorm life, and the lifelong friendships he gained. Those four years shaped his future, and left a lasting memory of everyone he met. His broken heart, when he lost his first love, will make you sad. You will also feel his emptiness when friends departed before him. And you’ll smile and laugh at the mischievous antics he and his pals got into.
This book is highly recommended for all military brats and their families, regardless of when or where they went to school, or branch of service.  Well written, and nicely told, it was a fun read!
Tom Johnson
Cold War Heroes
Posted by Tom Johnson at 9:07 AM