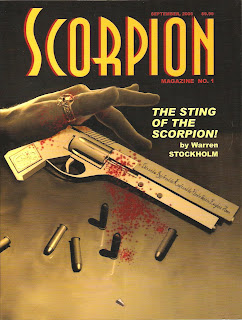 By Warren Stockholm
ISBN #978-0-97679143-0
Pop Pulp www.khpindustries.com
103 Pages
Price $9.99
September 2006
Rating: 4-Stars
Steeltown, Penssylvania. In this alternate universe, the Germans won WWII, but after forty years of occupation, they’ve been driven from America. Five years later, we are living in a world of Internet, email, fax machines and speakeasies and mob rule. Out of the chaos rises a paladin to battle the criminal element that the underworld knew only as The Scorpion. But the past has come back to challenge this defender of the city. As a child he had been German born, and raised as a superman. One of many clones. And the evil that he must face is one of his own, a brother, a superman just like him. But pure evil.
This was actually conceived as a possible series, as a new pulp magazine, titled SCORPION. This first story was powerful, the concept fantastic, and the action moved at a wonderful pace. The writing was intelligent, but the syntax was awkward. It switched from 3rd person narrative to 1st person narrative constantly, sometimes even in the same paragraph. Plus, there were many typos, which a proofreader should have caught. A second novel was advertised, The City of The Living Dead, but as far as I know it did not appear. The author pays homage to the old pulps. There is an intersection named Robeson & Gibson Streets, another street is named Stockbridge. A Fortress of Solitude is mentioned, etc.
Posted by Tom Johnson at 5:10 PM