TWO DOC SAVAGE ADVENTURES IN ONE VOLUME! Prospecting in the Wyoming badlands, Patricia Savage spies a man swimming in circles––high in a cloudless sky! After he falls to his death, the dead swimmer is discovered soaked to the skin. Who is he? How did he manage to swim through thin air? These are the questions Pat sets out to answer when her cousin, the famous scientist-adventurer Doc Savage, diagnoses her account as a hallucination caused by altitude sickness. But when the bronze-skinned girl vanishes, the Man of Bronze is forced to take action. A letter from Doc’s long-dead father presents him with a life-changing challenge that brings him to The Valley of Eternity….and the Man of Bronze does the unthinkable: he ditches his loyal aides in favor of his cousin, Patricia––the only one who can help him succeed in the most perilous quest of his entire career. 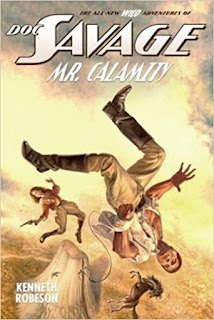 “Another Exciting Adventure of The Man of Bronze”

In “Mr. Calamity” Long Tom Roberts has inherited a ranch in Wyoming. Not a particularly large one. But it does have a milk cow and some horses, and a crusty old foreman to go with it. Pat Savage learns that there might be gold and jade hidden in the mountains in Wyoming, and decides to become a guest of the Circle Bolt Ranch, even if it does irritate the famous electrical genius. For Long Tom is at the ranch to work on electrical experiments, and doesn’t want to be bothered.

In the meantime, Pat is doing some prospecting when she meets a fellow named Hud who’s on his way to a swimming hole. Later, she sees Hud swimming in circles in the sky, then see’s him fall out of the sky. Discovering his broken body, she rides into town and calls the ranch to get Long Tom as a witness to everything. She has a mystery to solve. Unfortunately, things start happening fast. The body disappears, and Long Tom is almost hanged by men wearing flour sacks over their heads, and Pat encounters a funny little guy who shoots at her with a double-barreled shotgun. When she awakes, her horse has a broken leg and they are high up a mountain where there were no paths for her or the horse.

With all the weirdness, it’s time she called her cousin, Doc Savage to help her solve the mystery. Wow, I don’t know if it’s just that I haven’t read a Doc Savage in a long time, or they are just getting better all the time, but this one captured me from the beginning and wouldn’t let me go.  This is definitely one of my favorites. It has great mystery, good action from start to finish, and great supporting characters, including a couple of cowgirls who sling lead before asking questions.

“The Valley of Eternity” is the second novel in this huge volume. It is definitely different. In fact, I’ve heard from some that they didn’t like this story, but I found it a fun romp, even if it was unlike most Doc Savage adventures. Doc receives a letter from his father long after his death, telling his son that he needs to marry and sire a son to carry the Savage name forward. This throws Doc for a loop, and he starts dating, which causes riots and legal problems, then he gives his detective a list of names of women he’s known in the past that might be suitable mates. While this is going on he receives word from the Valley of The Vanished that the last shipment of gold is on the way, and there will be no more to help him in his battle to save the world from evil. This requires a quick trip to see what’s what, and he takes Pat with him, after all there is lovely Monja waiting for him in the Valley of the Vanished. And Pat is going to play matchmaker.  The hi-jinx of the situation is what this story is about. No great adventure, but I think Doc fans will enjoy it. I know I did. Highly recommended.


Author of THE GUNS OF THE BLACK GHOST
Posted by Tom Johnson at 2:42 PM