The Spy Across The Table

In this exciting international thriller featuring Japanese antiques art dealer and PI Jim Brodie, a double-murder at the Kennedy Center forces Brodie into a dangerous game of espionage—putting him in the crosshairs of the Chinese, North Korean, and American governments.
Jim Brodie is an antiques dealer, Japan expert, and second-generation private investigator. When two theater friends are murdered backstage at a Kennedy Center performance in Washington, DC, he’s devastated—and determined to hunt down the killer. He’s not the only one.

After the attack, Brodie is summoned to the White House. The First Lady was the college roommate of one of the victims, and she enlists Brodie—off the books—to use his Japanese connections to track down the assassin. Homeland Security head Tom Swelley is furious that the White House is meddling and wants Brodie off the case. Why? For the same reason a master Chinese spy known only as Zhou, one of the most dangerous men alive, appears on the scene: Those murders were no random act of violence.

Brodie flies to Tokyo to attend the second of two funerals, when his friend’s daughter Anna is kidnapped during the ceremony. It is then Brodie realizes that the murders were simply bait to draw her out of hiding. Anna, it seems, is the key architect of a top-secret NSA program that gathers the personal secrets of America’s most influential leaders. Secrets so damaging that North Korea and China will stop at nothing to get them. 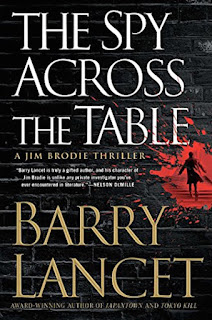 “A Thrill Ride A Minute.”

Jim Brodie is in Washington DC visiting the Kennedy Center to watch his Japanese friend’s Kabuki performance when the Japanese designer and another friend are murdered. Afterwards, he is approached by the Secret Service and taken before the First Lady. The stage designer was also a college friend of hers, and she wants Brodie to investigate the murders (you would think the FBI would be called in) . No sooner does he take the case, than Homeland Security agents let by Tom Swelley begin harassing him and beats him up. The case gets more tangled in Japan when he brings the Brodie Detective Agency into the Japanese end of the case.  Korean gangsters kidnap the daughter of the Japanese designer at the funeral, and Brodie discovers she is being transferred to North Korea. He must intercept the transfer, and heads to South Korea with a Marine combat squad to stop them from entering a tunnel on the DMZ. However, the team was spotted and the girl is moved to the border with China. Now Brodie must enter China, but tangles with the Chinese spy, Zhou, and is captured and turned over to Chinese torturers. This is all great stuff in movies and fiction.

This was a nonstop thrill a minute ride, with political stumbling blocks along the way. It is a well-written yarn that kept me turning the pages. There were some things I didn’t like about it, mostly the portrayal of agents in our intelligence departments. Men like Tom Swelley would have been dismissed long before he got out of hand. Everyone has a boss, and heads roll when agents go amok. Another thing is our Ambassadors; they do not go against the President of the United States. They represent the president.  The actions of the American Ambassador to Japan was beyond imbecilic. And finally, let’s look at torture. Yes, torture does exist, and it is horrible. But I can guarantee the Chinese would have obtained what they wanted from Brodie within hours without torture, they didn’t need to use physical torture to get the information they wanted.  But Brodie goes through many days of torture. Now, what happens to a person after they have been tortured for days on end? They don’t get up and fight, or cross China in an automobile. They need physical and mental therapy for months before they can perform anything close to normal. I won’t even discuss the subject of a Chinese spy rescuing Brodie, except to say it wouldn’t happen. Still, with all these things I didn’t like with the story, this is a work of fiction, and as such, it is very entertaining, and I highly recommend it to readers.