The Wild Beasts of Wuhan

Meet Ava Lee, alluring but deadly, with a mind like a steel trap, as she chases millions of dollars and dangerous criminals around the globe in this exotic and fast-paced new crime series by Ian Hamilton.
In The Wild Beasts of Wuhan, Wong Changxing, a rich Chinese powerbroker, has just been bilked out of $100 million in an elaborate art forgery con. His one hope of recovering the money, and of saving face, is Ava Lee―a forensic accountant with a talent for tracking down untraceable funds. With the help of her mentor, the Triad-connected Uncle, Ava traces the provenance of the meticulously forged paintings to Denmark, the Faroe Islands, New York, and London. As she infiltrates one of the most prestigious auction houses in the world, she uncovers a massive web of corruption, where high art and high-stakes fraud threaten more than just her client's business―this is one scam that could get her killed. Ava Lee is one of the most scintillating, unique heroines to come along in years. 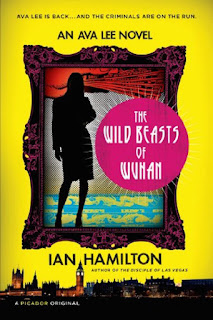 In Book #3 of this fascinating series, Ava Lee, a young Canadian-Chinese forensic accountant works at recovering money stolen. In this case, a wealthy Chinese gentleman from Wuhan, China has been swindled out of 73 million dollars in fake art masterpieces called Fauvist art, which is wild colors also known as wild beasts. She’s not sure the money can be found, due to the matter of time that has passed since the purchase, and the man who brokered the deal has died and his records destroyed, but she promises to look into for a few days, and if leads look promising she’ll have Uncle offer a contract from Hong Kong. Her trail takes her to Denmark, Iceland, London, and New York. Once she discovers the evidence to proceed, she starts working to bring the money back to their clients, only to have the clients decide on vengeance instead.

This was another fascinating story featuring the martial arts champ, and the method of her trail to the final source of her investigation. The characters come alive, and Ava Lee is a force to be reckoned with. Highly recommended.


Author of BEHIND THE MASK
Posted by Tom Johnson at 3:11 PM