Bremy St James is back in a brand new adventure, mixing chaos, humour, sex, and superheroes in this fresh, funny, flirty series. It’s the superhero romance you didn’t know you needed…
Fresh off thwarting the crime of the century, Bremy St. James is back and more determined than ever to fight by the side of the city’s top superhero, Dark Ryder. There’s just one problem: Dark Ryder’s disappeared.
To make matters worse, Bremy’s evil billionaire father, Atticus, is taking her lack of family loyalty very personally, and Bremy’s last tie to her old life, her reason behind her choices—her sister—is distancing herself as well. 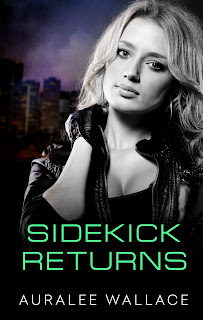 With Dark Ryder missing after the first novel, Bremy St. James is on her own in the city’s dark streets, trying to be a super heroine, but no one is taking her seriously. Dark Ryder has been seen on rooftops shouting weird things and acting completely strange, and Bremy is worried that her father is to blame for her strange actions. But Ryder’s mentor, Choden is also missing. And Bremy’s father is definitely up to no good. This time he may even kill Dark Ryder if Bremy can’t stop him. But she can’t even stop a purse-snatcher, how could ever hope to stop her super villain father?

This was another exciting tale of Bremy St. James, Dark Ryder’s Sidekick wannabe. All of the regulars from the first novel are back, and throw in a few more this time around for some more hijinks. Bremy’s mobster landlord gets her involved in underground wrestling, plus she’s still working at the strip club as a gopher for the strippers. All of her crime-stopping attempts end in her looking like a fool. Poor Bremy begins thinking maybe she doesn’t have what it takes. Then to her surprise her wheel-chair-bound twin sister does become a super heroine through their villainous father’s manipulations in the scientific laboratory. But she’s working for their evil father. There’s no one to save Dark Ryder. No one, unless …

I really loved the original cover for the first book, as it featured a super heroine, but I think the publisher wants a new look for the series, so now the covers feature a boring image of just a beautiful woman. I wasn’t expecting the ending (and a new beginning, maybe?), and I did miss Dark Ryder, as she is not around to help Bremy in this adventure. She’s a captive in the lab of the super villain. To be honest, I like Bremy, but I’m a fan of Dark Ryder too, and I really wanted to see more of her, as she takes care of her bumbling Sidekick. Still, the author’s writing is fun, and the story rates five stars. Highly recommended.


Author of THE MAN IN THE BLACK FEDORA
Posted by Tom Johnson at 4:21 AM