Imagine that your father is one of New York City’s top gangsters, and that you want nothing to do with him or his criminal empire. Now imagine he’s been murdered . . . and the only person who gives a damn is you. Meet Mat Lawrence, a stand-up guy—think Gary Cooper—who’s got one thing on his mind: revenge.
The last place Mat wants to go is back to New York, but that’s where the killers are, and he won’t stop until they’re dead . . . or he is. And there’s only one man who can help him track them down: his father’s criminal attorney—the Mouthpiece.
But there’s more than a desire for revenge at play in this deadly game. When Mat’s old man went down, a million dollars went missing. Put it all together—a cold-blooded murder and a cool million gone—and it’s a pretty good bet that the one thing Mat is sure to find is some serious heat.
Also includes the tales of mystery, Flame City, the story of one man’s harrowing attempt to save his father and the city from a serial arsonist; Calling Squad Cars!, in which a police dispatcher goes to extraordinary lengths to bring down a gang of bank robbers after he is accused of working with them; and Grease Spot, the story of a former racecar driver, now the owner of a wrecking company, who plays fast and loose with the police . . . and may have to pay for it. 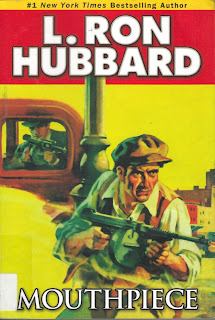 This volume contains four stories: Mouthpiece from the September 1934 issue of THRILLING DETECTIVE; Flame City; Calling Squad Cars; and The Grease Spot.
In MOUTHPIECE, Mat Lawrence returns to the city from honest work in the desert building a dam to find his mob boss father dead and his money missing. His father’s lawyer claims that another mob boss killed him and took his money. Setting Mat up with a couple gunmen for a ride to visit the mobster, Mat is taken for a ride instead. Turning the tables on the gunslingers, he figures out the real facts, and forces the mouthpiece to admit that he was the murderer. With his father’s murder solved, Mat decides the desert is a better place than life on the streets.
A firebug is setting fires all over town in FLAME CITY, and the mayor is ready to force Blaze Delaney out as fire chief because his crew can’t handle all the fires. His son, Detective-sergeant Tom Delaney rides with him to the latest fire scene and discovers evidence that gets him waylaid by two hoodlums. He’s left to die in a fire across town while his father works on one elsewhere. Escaping the burning building, he rounds up the hoods, and then goes after the gang boss, stopping an insurance fraud that has resulted in several deaths. The insurance company is happy with the fire chief and offers to fit the station with brand new equipment, and the chief has his job secured once more.
CALLING SQUAD CARS! Jim Collins is the radio dispatch officer for the police department, but he appears to be aiding the mysterious “One-Eye” Tasori Mob. While on duty, Collins’ voice directs squad cars away from Tascori’s activity, letting the mob operate without interference from radio patrol cars. When he’s relieved of duty, Collins accidentally runs across the Tascori mob during a robbery and follows them to their hideout. Unfortunately, he is captured, but he spies a short wave radio set where Tascori himself imitates Collins’ own voice, and now understands the set up. While the crooks eat in another room, Collins sets up the radio and brings the police down on the bad guys.
THE GREASE SPOT: Bill Milan and Joe Pagett run the Milan Wrecker Service.  With a police band radio set up in the shop, and Bill an ex-racer, he always beats the police and other wreckers to scenes of accidents and is hired for his service on the spot. But other wrecker outfits want his advantage stopped, and the police are upset that he beats them to the scene, and they’re ready to lock him up if he doesn’t stop. Then comes the night he’s again first on the scene, but this time a couple of bank robbers are in the wreck and they take him hostage and force him to drive them out of state. Now he’s in a fix and must use his brain to get out of some real trouble – alive.
Four good stories, each plot different, and each a fun read. Hubbard was an excellent writer, and could spin a good yarn, regardless of the genre. This is fast paced, with plenty of action, and with interesting characters. A good read.


Author of PARTNERS IN CRIME
Posted by Tom Johnson at 4:20 PM