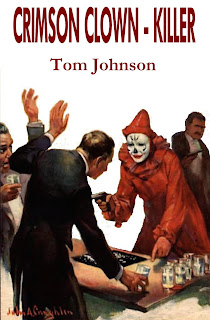 “Crimson Clown – Killer” by Tom Johnson. When The Crimson Clown discovers the planned heist of a charity ball, he wasn’t expecting a mob rubout at the same time. Now he may be caught in a web of murder! This is another fascinating character created by Johnston McCulley that appeared in DETECTIVE FICTION Magazine between mid and late 1920s, then popped up again in POPULAR DETECTIVE in 1944. He deserved a new story. “Crimson Clown – Killer” is now available  on Amazon Kindle for $1.99, at http://www.amazon.com/dp/B01CVVQM0W
Posted by Tom Johnson at 2:43 PM