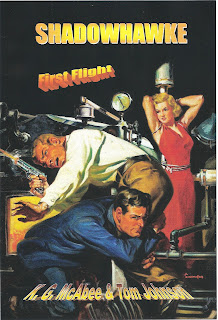 Deposed from her Balkan kingdom, the Spider Lady rules a new kingdom in America. Taking over the New York underworld, she operates from a hidden underground cavern. Those who oppose her are forced into her deadly web. But one man and his fighting team take up the trail to bring justice to the Queen of the underworld. The Shadowhawke!
With the ever-rising cost of pulp-related books, Tom Johnson re-launched his old Fading Shadows imprint to see if it was possible to produce a book for under $10.00. With Gail McAbee’s birthday coming up in November, Tom chose their action-packed pulp story, “Shadowhawke: First Flight” as an experiment. This 128-page (4 x 7) paperback is the result. Printing isn’t cheap, but we’ve eliminated the middleman. With only a few copies ordered for this experimental product, Tom is offering them on a first come basis at $7.95, plus postage. This was not meant for regular sales and is not available on Amazon or in bookstores. Contact Tom at fadingshadows40@gmail.com for ordering information while they last. Available now in very limited supply.
Posted by Tom Johnson at 7:01 AM